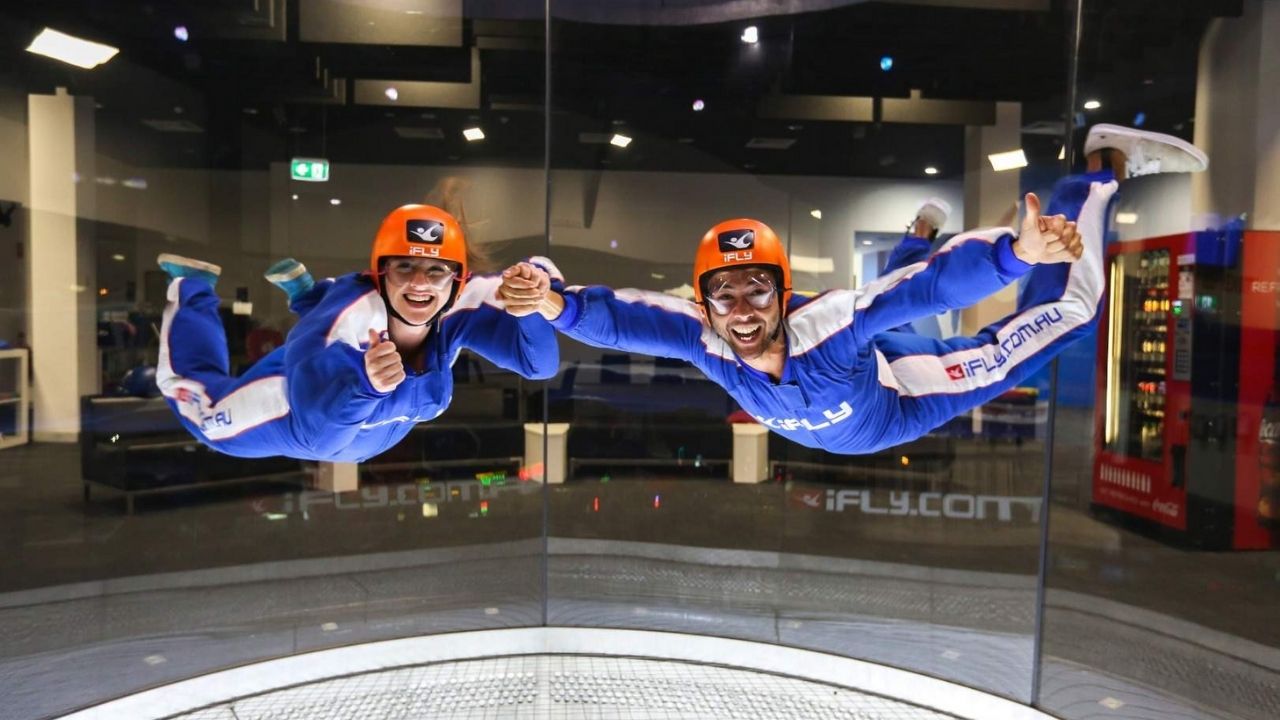 That feeling of being one with the birds is too good to be true. Skydiving is one of the most exciting extreme sports to get into; nothing can compare to those 45 seconds of bliss when you hit freefall and float around the sky.

Well, not nothing – indoor skydiving is a sport that hopes to replicate the sensation of skydiving in a safer environment and over an extended period.

Has it been successful in doing that so far? That’s what we’ll discuss today, along with the basic science of how wind tunnels work, whether they’re dangerous and how you can get into the sport.

I’ve been skydiving for over 6-plus years myself, and I honestly love it. It’s literally one of my favorite things to do. A couple of years ago, I tried indoor skydiving. While it doesn’t provide the authentic outdoor skydiving experience, I can surely tell that it’s fun. It also has a few features that outdoor skydiving doesn’t.

What is Indoor Skydiving?

According to iFLY, indoor skydiving or bodyflight is the sensation of freefall. The experience is generated through big fans (over 12-feet in diameter) that regulate the airflow in the tunnel.

The sport has now become wildly popular among teenagers who just can’t get enough of the experience – especially those who are not old enough to go outdoor skydiving yet. In fact, two of the best indoor skydivers in the world are teenagers – Sydney Kennett (14 years old) and Kyra Poh (18 years old).

Kyra Poh, who holds the moniker of “The Fastest Flyer” globally,  has won over 33 gold medals and has 3 Guinness World Records. Sydney is the long-standing champion of the National Junior Indoor Skydiving championship in the United States.

Contrary to how it might look, indoor skydiving is an extremely safe sport. While you can get minor injuries, you won’t be hurt seriously if you follow proper procedures and safety guidelines.

Skydiving tunnels are essentially advanced wind tunnels engineered to keep a person afloat for an extended time period. This is one of its biggest advantages over outdoor skydiving – the freefall period could be as long as you want because the wind speed can be adjusted to compensate for gravity.

Wind tunnels have been there since the beginning. The Wright Brothers used the concept of wind tunnels to fly the first-ever plane in the world. NASA constantly uses them to test aircraft.

iFLY’s indoor skydiving tunnels work by using vertical wind tunnels. Three vertical tunnels stand parallel, connected to air ducts and 12ft+ fans above. It looks like the number eight, but sideways. Fans draw in air and regulate it to simulate the floating experience.

Wait, above? There’s no fan below the base to push the air up? The fans were placed below in the early wind tunnels, but they weren’t very efficient in controlling the airflow. The placement resulted in a lot of drag (or turbulence), and thus wasted energy.

The earliest rendition of modern-day vertical tunnels came in 1977 when planes were placed above the chamber to suck the air instead of pushing. Still, the current tunnels are a bit more complex than that.

There are three vertical columns in the wind tunnels, and the two air ducts above are equipped with one fan each. The chamber where you experience wind tunneling is located in the middle of the second column. The fans at the top draw air from the flight chamber and push it aside to the first and third columns (the Return Air Towers). These huge fans can draw air at around 30mph.

Air then flows through Return Air Towers only to be converged at the second column beneath the flight chamber and goes up to help you stay afloat. Science tells us that there’s a loss in energy every time air hits the air tower walls before changing its direction. This is known as “drag” or “air turbulence.”

Does that mean the air that comes out in the flight chamber is less than 30mph? No, you wouldn’t be able to “fly” if that were the case.

As I explained in my guide on how skydiving works and how divers maneuver, skydivers freefall at about 118.6mph (roughly 120mph) after they hit terminal velocity and fall with gravity.

This means that you need a wind speed greater than or equal to 120mph to fly. There’s a neat science trick that makes this whole setup possible. The air ducts are equipped with specifically engineered air vents that change air direction without causing turbulence.

That’s how you get 30mph of air throughout the setup. The last step is to quadruple the air pressure because the terminal velocity is 120mph. This is achieved simply by narrowing the air duct beneath the flight chamber. Because the exit is narrower than the entry, air particles push each other, which increases the speed to 120mph and makes you fly! The speed of your standard iFLY tunnels can go as high as 160-180mph.

These air vents can pass a million cubic meters of air per minute. Cool, isn’t it?

You probably already know about the basic aerodynamic principles if you’re a skydiver and how you could potentially do countless maneuvers after the floating begins.

This is achieved thanks to the Archimedes Principle –  if you push/displace fluid molecules, they’ll counteract with a buoyant force on the displaced area. That’s how boats stay afloat on water. Simply put, you can go up and down just by changing the position of your hands and legs because it depends on the cross-sectional area of the air your body interacts with.

READ:  Quick Skydiving Guide: How do skydivers move in the air?

For example, your body experiences more air pressure and goes up if you spread your hands and legs. The four basic positions of indoor skydiving are based on the standard aerodynamic principles that are used in designing airplanes.

The first position is the basic belly fly, where you’re essentially just lying on your belly. You’ll go up if you spread your arms and legs, down if you keep the legs straight and arms sideways. You could also rotate 360 degrees by tilting one of your legs sideways.

The second position is back fly – this looks like you’re sitting on a chair lying on the ground. Your back should face the air vent to perform back fly, and your legs should be in the sitting position.

The third position is sit-fly that looks like you’re just sitting on a chair. You could put your hands forward in a parallel position to go up.

The fourth and final position is head down, where you’re upside down. Your head should be facing the air vent, and your cheek and back should be perpendicular to the base of the chamber.

How much does indoor skydiving cost?

Indoor skydiving is not as costly as one might think. Standard iFLY package for 1 person (2 flights) starts at $59.95 and $272.40 for a family package (upto 5 people). You could pay extra for other benefits such as professional photos and videos, but that’s up to you.

Can you hurt yourself indoor skydiving?

Generally, injuries can happen while indoor skydiving, but you won’t be seriously hurt. It’s not dangerous and certainly safer than its outdoor counterpart. Minor bruises and injuries are possible while indoor diving, but that’s not alarming for any extreme sport.

Recent turmoil about iFLY’s flying agreement describing indoor skydiving as an “Inherently Dangerous Activity Involving Strenuous Physical Exhaustion” led many to question whether the sport is safe or dangerous.

WGN did a piece highlighting various high-profile cases of indoor skydiving injuries. They concluded with the following facts:

Nonetheless, there are various safety procedures in place to keep you safe.

Pro tip: Remove your jewelry or any other accessory to prevent accidents. Also, make sure to empty your pockets.

Read More: Do skydivers have backup parachutes? The Complete Guide

That’s it, now you know everything about indoor skydiving and how it works. The next step is to just book your session and experience this fantastic sport first-hand.