Do skydivers have backup parachutes? The Complete Guide 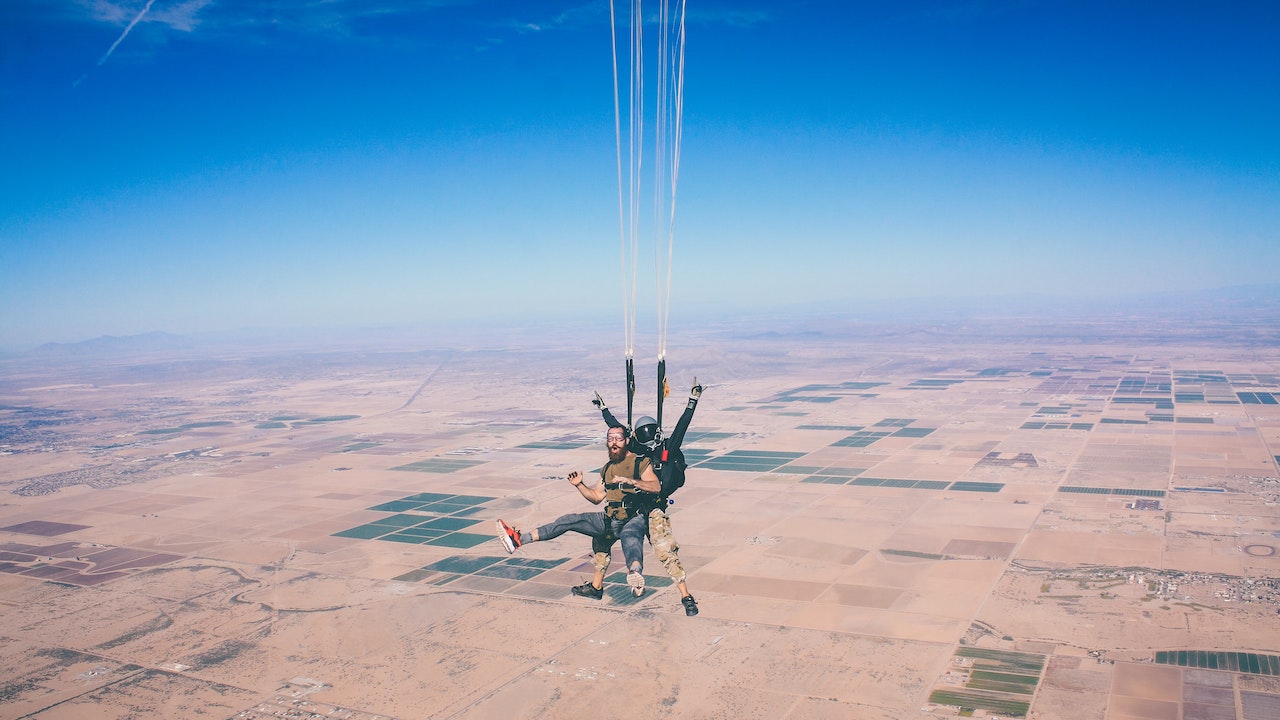 Skydiving is easily one of the biggest adventure sports these days but also one of the most debated. It’s safer than ever before, but people are still hesitant to jump out of a plane and sometimes overlook all the safety measures in place.

But let’s be clear: you don’t suddenly wake up one morning and decide to jump off a plane with a parachute. That’s the kind of thing you’d see in a movie. In reality, there is a lot of preparation and training behind each jump.

I’ve been skydiving in the United States (and overseas) for 5+ years. Today, I’ll answer some of the most frequently asked questions about parachutes and various failsafe mechanisms when skydiving.

First off, do skydivers have a backup parachute? YES, they do.

All skydivers have two parachutes when skydiving: one main parachute (canopy) and one backup parachute (reserve) if the first one doesn’t open or malfunctions. The reserve can only be packed by FAA-certified riggers and focuses on reliability and safe low-altitude landings, unlike the flashier main ‘chute.

Table of Contents
1. Do tandem skydivers have backup parachutes too?
2. How is reserve different from the main parachute? Do they not fail?
A. What is AAD and Reserve Static Line?
3. How often do parachutes fail? Is skydiving safe?
Can both parachutes fail?
A. How do you survive a failed parachute?
I. Reaction is your first course of action
II. Aim for areas that can cushion the blow
III. Navigate to the desired area
B. Has anyone ever survived a parachute not opening?
4. Can you reuse a parachute?
A. Know the material
B. Store it right and keep it safe

1. Do tandem skydivers have backup parachutes too?

If you’re not familiar with tandem skydiving, don’t worry, it’s not rocket science.

Tandem skydiving is a popular skydiving option for inexperienced tourists or newbies who might be learning the sport but can’t wait to make the jump. Tandem skydiving is when your instructor or a professional skydiver (for tourists) makes the jump with you attached to hooks and a harness. This allows them to open the parachute smoothly and ensure a safe landing for you.

Coming back to the question…

Tandem skydivers always carry two parachutes with them for every jump – one is flashier (canopy) while the other (reserve) prioritizes reliability over putting on a good show. These reserve systems are fitted with an Automatic Activation Device (AAD) device and a Reserve Static Line (RSL).

2. How is reserve different from the main parachute? Do they not fail?

Before explaining the differences, we first need to clear up a common misconception. The reserve parachute almost always works. However minute the chances may be, they can fail too.

Reserve parachutes aren’t made to produce 100% accuracy; in fact, no company can provide 100% accuracy. So, it comes down to a numbers game. Main parachutes (or canopies) have a low failure rate, and they’re not even made with the level of precision used on reserve parachutes. Hence, the chances of both the main and reserve ‘chutes failing at the same jump are microscopic.

The main parachutes are designed for flight performance and showcasing the skydiver’s skills, while reserve parachutes have only one goal: a safe landing. Reserve parachutes are also taken out and re-packed every 180 days to ensure proper installation and are kept in the “free bag” when skydiving separate from the canopy.

Reserves are made very carefully under controlled environments and are packed by FAA-certified riggers. The manufacturing companies put these reserves through the most extreme tests to ensure their quality and consistency.

Another critical difference between the two is whether they’re in the “free bag” or not. The reserve parachute is put in the free bag to not entangle with the canopy.

A. What is AAD and Reserve Static Line?

Automatic Activation Device (AAD) is a simple microcomputer module that’s fitted inside the parachute container. It’s responsible for automatically deploying the parachute after a certain altitude or in any event or condition that may prevent skydivers from doing so themselves. Cypress manufactures the most commonly used AADs in the industry.

The United States Parachute Association (USPA) calls the Reserve Static Line (RSL) a simple and straightforward device. It has a snap shackle that attaches to the main risers on the end of the lanyard, and the other end attaches to the reserve ripcord.

The working of an RSL is quite simple as well: when you pull the cutaway handle to detach the main canopy, the main risers release from the harness. The RSL then immediately pulls the reserve ripcord. This whole process, along with AAD, deploys the reserve parachute even before the jumper can manually pull the reverse-ripcord handle.

You’ll be doing yourself a HUGE favor by adding RSA to your skydiving gear. Data analyzed by USPA from 1999 to 2013 suggests that more than 25 fatal accidents could have been avoided if the parachutist had an RSA line.

READ:  Quick Skydiving Guide: How do skydivers move and breathe in the air? How do they land?

3. How often do parachutes fail? Is skydiving safe?

Parachutes can fail. According to USPA, one in every thousand parachutes have a mid-air malfunction that initiates the reserve parachute.

However, “fail” is used as a broad term here; that’s why USPA used the term “malfunction.” A parachute is much more likely to open in an unflyable position than it is not to open at all. And skydivers are already trained on how to fix an unflyable parachute just in case.

While it’s extremely rare, a parachute may not open at all. If that happens, you’ll just have to use your reserve ‘chute.

Can both parachutes fail?

Statistically speaking, both main and reserve parachutes can fail mid-air, but the possibility of that happening is minuscule. The chances of you getting struck by lightning (1 in 2.32 million) are higher than both of your parachutes failing.

So, is skydiving safe?

To put things in perspective, skydiving is an extreme sport that comes with risks. I mean, you’re jumping from an airplane after all. But does that mean you should be worried? Absolutely not. Even if you have the worst luck imaginable, there’s plenty you can do to survive a rare, dangerous landing.

A. How do you survive a failed parachute?

You can survive a freefall after a parachute malfunction in mid-air. Pfft, I know, right! It seems like something straight out of fiction, but it’s not. Here are a few tips on how to survive when your reserve fails:

I. Reaction is your first course of action

How you react to a tricky situation is very important. Spread your body in an X to stabilize your descent, and then use the skydiver’s landing stance when approaching the ground.

II. Aim for areas that can cushion the blow

In an interview with Vice, Michael Homes explains how he survived a freefall from 15,000 feet after his canopy and reserve failed. Michael landed on a giant blueberry bush on his left ankle, which pretty much broke his leg. But, he survived because the bush cushioned the blow, and he didn’t hit the ground head first. DO NOT aim for the water for cushioning the blow or you could drown.

III. Navigate to the desired area

It’s easy to look and decide “that’s where I’ll fall,” but navigation is a tad more difficult. Fly your standard landing pattern to the ground.

B. Has anyone ever survived a parachute not opening?

Yes, sure have! Throughout history, many individuals have survived free falls caused by one reason or another. Let’s look at their jumps and altitudes:

4. Can you reuse a parachute?

Another common misconception among non-skydivers or folks interested in getting into the sport is that parachutes aren’t reusable. That’s simply not true.

Parachutes are reusable. In fact, it’s recommended that you do so. Any malfunction while skydiving can be fatal; therefore, professional skydivers prefer to pack and prepare their parachutes themselves meticulously. Properly packed and good quality parachutes tend to last for thousands of skydives.

Here are some tips to help you maintain your ‘chute for a longer time.

A. Know the material

First and foremost, you should know the material of your parachute, whether it’s silk, Kevlar, nylon, or something else. That’s because different materials have different properties. While silk parachutes are lighter and stronger, nylon has excellent wind resistance, endurance and is considerably cheaper.

B. Store it right and keep it safe

That’s it for the parachutes 101. If you have any other questions about skydiving or anything else, get in touch with me.