Quick Skydiving Guide: How do skydivers move and breathe in the air? How do they land? 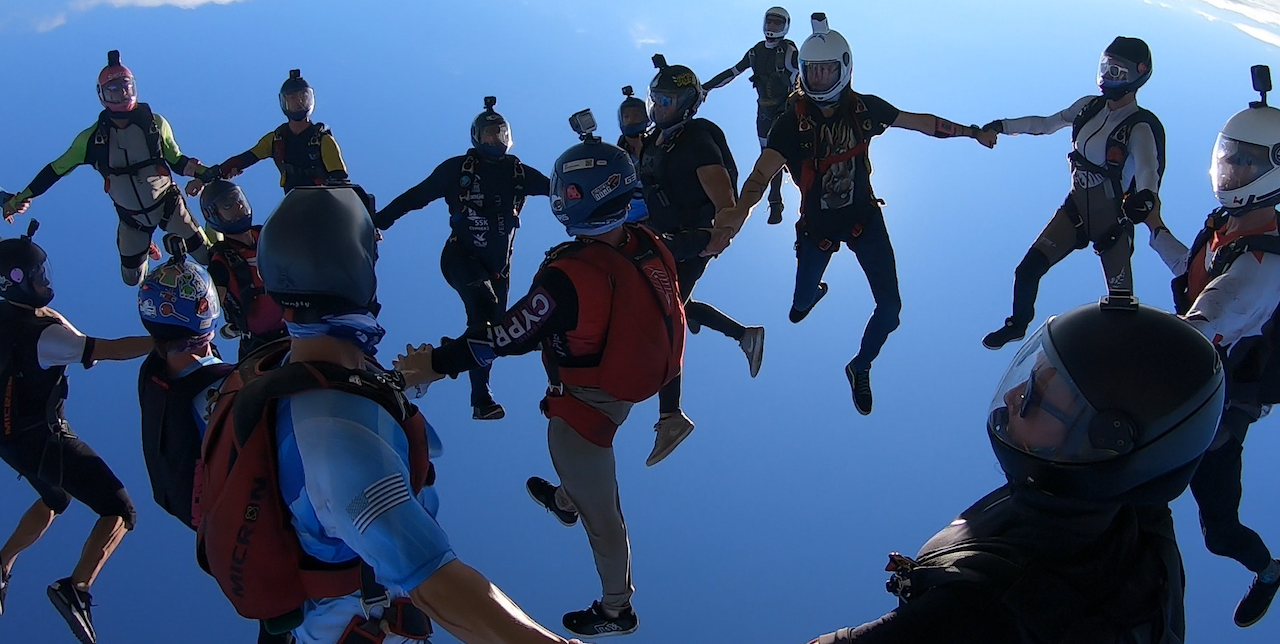 Skydiving is one of the most addictive extreme sports that you can do these days. As the saying goes, “If riding an airplane is flying, then riding a boat would be called swimming. If you want the true experience, get out of the vehicle.”

And it’s 100% true. Skydiving can even be therapeutic as it stimulates much-needed energy and positivity. One thing that makes skydiving so addictive is the idea of literally flying in the sky – that moment when there’s no difference between you and the birds.

That brings up a lot of questions though. How do you even navigate the skies, and more importantly, how do you land without any repercussions? When I first got into skydiving, I used to worry about all this too, but thankfully that didn’t stop me. I’ve been skydiving for 6+ years now and will answer all of your questions (and more) in this quick guide.

Skydivers reach terminal velocity about 10 to 12 seconds after jumping from the airplane. At that point, you reach maximum speed or the point of zero acceleration and begin to float in the sky as you descend to the ground.

Before I explain the steps, here’s what you need to know:

When you jump out of an airplane, you start falling because of Earth’s gravitational forces, right? Any object near Earth’s surface will accelerate at a constant rate of 9.8 m/s2. So, when you jump, you fall at a speed of 21.9mph after 1 second, 43.8mph after 2 seconds and so on. On average, skydivers can reach a maximum velocity of 200mph during freefall.

The terminal velocity of an average skydiver falling is 118.6 mph. In other words, after a few seconds, you’ll fall at a constant speed of 118.6 mph with zero acceleration, and this is where the fun begins!

A. How do skydivers float?

Does that mean gravity doesn’t affect you after a few seconds? No. This is where Archimedes’ principle of buoyancy comes into play. In layman’s terms, the principle states that “when something is flowing through a fluid, it displaces the tiny molecules and will be met by some resistance from the fluid particles.”

In a skydiver’s case, this resistance is air resistance. After a few seconds, your body stops accelerating and reaches the terminal velocity. The air resistance at that point is equal to gravity acting upon your body, and the net force becomes zero, making your body float in the air.

Yes! That’s what makes skydiving so addictive. There’s no fun in constantly falling or getting hung on a parachute. It’s those few minutes that make it truly blissful.

B. Can you breathe mid-air? Do your ears hurt while flying?

Skydivers can breathe mid-air just like they would on the ground – while both free-falling at 160mph and floating at 120mph!

First-timers sometimes find it hard to breathe because of the extreme experience itself and not the lack of oxygen. But if you just take a deep breath and calm down, you can breathe normally. For the ears, it depends.

In general, your ears won’t hurt while skydiving. You’ll feel the altitude change a bit as it climbs, but that’s hardly a cause for concern. But skydiving when you’re congested can be dangerous. Worst case, your eardrums could puncture because of the congestion and blockage.

It won’t lead to permanent hearing loss, but it’ll hurt pretty bad. So, if you’re congested, you’re better off sitting one out.

2. Why do skydivers spread their arms and legs?

Skydivers spread their arms and legs to get in the “floater” position. This increases the air resistance (buoyancy force) on your body and slows down the rate of descent so you float longer.

You can fly (float) in the air and move around however you want by positioning your arms and legs. Even though it feels like something straight out of a comic book, there’s a scientific principle behind it.

If you look closely at the definition of Archimedes’ principle, it works based on how many fluid molecules are being affected, i.e., it depends on the surface area.

This means, when skydivers spread their arms and legs to get into a “floater” position, they increase air resistance by increasing the body’s surface area.

A. How do skydivers regulate height?

For those who have played GTA games and jumped out of airplanes using parachutes, you already know these two positions.

Skydivers regulate their height by using two body positions: floater and diver. In the floater position, you spread your arms and legs to slow down the fall, while in the diver’s position, you keep straight (like a missile) to fall faster.

B. How do parachutes work, and when to open them?

Now that we’ve floated around enough, it’s time to start preparing for landing.

Parachutes work by taking advantage of Archimedes’ principle. Its large surface area and circular design trap much more air than your body so a huge amount of air resistance is created to deaccelerate your fall.

BUT, there’s one problem. You cannot trap fluids, especially gases, as they’ll start moving in random positions to try and escape. This can cause the parachute to flip upside down, which is very dangerous for the diver.

Here’s an excellent diagram by BBC.co.uk explaining the process:

This is why parachutes have a huge holes in the front.. Since the holes are much smaller than the parachute, the amount of air that’s trapped is more than the amount leaking out.

So, you can still accelerate while making sure your parachute doesn’t flip. This also helps skydivers change their direction by changing the angle of air leaking out of the parachute.

Skydivers open their parachutes based on the altitude. They usually carry two altimeters (one at the wrist and one at the helmet) to measure their distance above the ground. In case of failure, reserve parachutes have AADs to automatically open the ‘chute after a certain altitude.

3. How do skydivers know where to land?

First-time skydivers, especially tandem skydivers, are often worried about the landing and whether it’ll be dangerous. But in reality, modern landings are quite safe because of the flaring (the act of stopping the forward motion) of the parachute.

Nowadays, skydivers dive in pre-determined routes and landing destinations. You have to steer your parachute to a well-suited area and start flaring the parachute as you approach the ground for a successful and safe landing.

Skydivers generally land in one of two ways: feet-first or butt-first. Both are equally safe and can be used by tandem skydivers.

Here are some guidelines about choosing the right landing spot provided by The United States Parachute Association (USPA):

READ:  Do skydivers have backup parachutes? The Complete Guide

That’s about everything you need to know about skydiving for the first time – from jumping off the plane to landing on the ground safely. I recommend trying skydiving at least once in your life. If you’re like me, you may even get hooked! If you have any questions, get in touch with me.