How do climbing gyms set up and grade their routes? 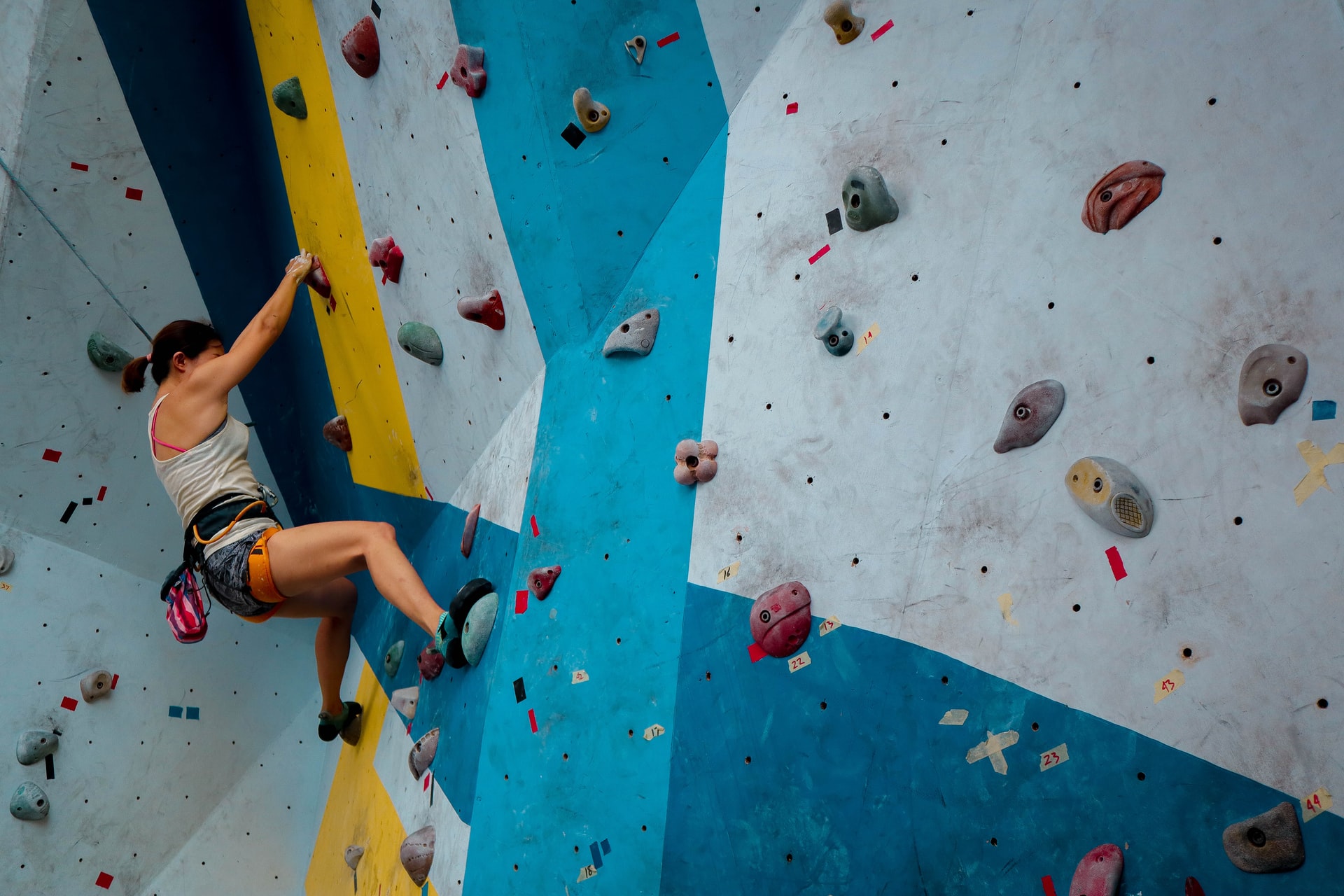 I get asked this question often by curious climbers, aspiring route setters, and even soon-to-be climbing gym owners.

Climbing grades have a stigma to some in the rock-loving community. A word of advice – you might miss out on fun experiences if you’re overly focused on setting routes, but that’s not to say they aren’t important.

Without grades, climbing wouldn’t be regulated or all that safe. From bouldering, sport climbing, and alpine climbing to ice, trad, and even mountaineering, grades help us define the difficulty of each climbing route.

Free climbing is fun for me, but I’ve been bouldering and rope climbing for a decade and a half. A beginner might not have the same affection towards it.

So, what exactly are climbing grades? Are they arbitrary or standardized? How do gyms grade their routes? We’ll dig into these questions today.

But here’s the short answer.

Climbing gyms grade their routes through route setters using V-scale for bouldering, the YDS scale, and the French System for other forms of climbing. Once the setter provides a preliminary grade to a climb, various climbers then test it to decide upon an appropriate final grade.

In the U.S., we use the Yosemite Decimal System ( known as the YDS scale) to grade climbing routes. The YDS scale has five classes – classes 1 and 2 are reserved for walking and hiking, respectively. Class 5 is used for rock climbing and bouldering.

Class 5 is divided into sections or “climbing grades” like decimals in a number system.

The YDS scale also uses ‘+’ and ‘-‘ signs to denote if a route is slightly harder or easier than its category. For example, 5.7+ might be harder than a 5.7 but not enough to be termed 5.8.

The French System is not much different than the YDS scale. Most of the world uses the French System except for the US. Leave it to the U.S. to have their OWN metric system in everything!

The French System is difficult and arguably “random” to understand at first, but it makes sense when climbing. It starts from 1 and incorporates “+” symbols for harder grades but not minus ones. The ‘+’ symbol is available for all grades except 4 and 5.

The French System starts using letters to indicate increasing difficulty from 4 and 5. Here’s how the current system looks like:

In hindsight, this scale doesn’t make sense at all!

Bouldering routes, or bouldering problems, are graded using the Hueco System (V-scale) in climbing. It’s extremely simple compared to YDS and the French system. The Hueco System ranges between V0 to V16, with V0 being the easiest and V16 reserved for professional climbs.

How are climbing routes graded?

When choosing a grade for the climb, route setters or judges consider the length of the climb, duration of the climb, difficulty level and requirement of safety gear, incline, and the placement of handholds and footholds.

They also consider potential techniques like smearing that may be required to send the route.

In outdoor climbing, the climbs are graded by the first few climbers who victoriously send the route, like Adam Ondra rated Silence as 9c after climbing it successfully. Some routes may also be graded by climbers who put bolts into the rock before a climber enters the scene.

Here are the steps:

Even after publishing, a climbing grade can be challenged and successfully updated in guide books. But it requires compelling reasons with reasonable proof.

Grading for indoor climbing routes is even more inaccurate and even arbitrary. A single climber calls the shots.

Route setters are responsible for grading routes in gyms for indoor climbing. Before setting a route, they decide an approximate range of difficulty. Next, they map out a route around movements and techniques of that difficulty.

Finally, the route setter tries and re-tries the routes before deciding a climbing grade.

Current Problems in the Grading System

Climbs aren’t graded by a standard or central committee. Grading is done almost exclusively by local climbers or “first climbers.”

It’s hard to deny that grading climbs can become subjective more often than not. Locations make a route’s grade subjective.

Climbs often become more difficult for climbers who aren’t familiar with prominent climbing types of the area. Just experiment for yourself.

Find a random set of climbers in your gym with different strengths and weaknesses. If you all attempt to send the same route, the person who is better at certain movements required by the route will be inclined to provide a lenient grade.

Professional climbers and route setters count the number and type of movements and techniques required to send a route. This makes the grading equation more objective.

Climbing grades don’t incorporate imminent danger. Instead, we use ratings to indicate safety. Like movies, ratings are G, PG, PG-13, R, and X.

For example, a 5.7 G has the same climbing difficulty as a 5.7 R. But the consequences of falling are quite different between the two routes.

READ:  How to become a route setter & get a job in the United States?

How often do climbing gyms change their routes?

There are no standardized norms or regulations for resetting climbing routes. But as expected, larger gyms tend to change their routes more often than small gyms.

The frequency varies among different gyms and even climbing types. Some small gyms are infamous for not regularly changing their routes. While it can happen only once per quarter, that’s far from “normal.”

Normally, gyms reset their bouldering problems / bouldering walls almost every week. That’s because bouldering routes are much easier to set.

Here in Georgia, my gym resets sections of the lead climbing wall weekly. The entire wall is also changed within 6-7 weeks.. This gives us new routes to challenge ourselves.

If you’re interested in top-roping, you might be luckier than boulderers. The ropes and routes are known to change twice per week at some local gyms around the country.

How much does it cost to open up a climbing gym?

If you think climbing gyms have excessive membership fees, then you probably haven’t considered the costs to open and run a climbing gym.

It can take about $500,000 or more to start a new climbing gym. The remodelling costs alone are between $150,000 to $200,000. Plus, liability insurance, staffing & equipment, upkeep & maintenance, route refresh, and the building price (which is not like regular gyms) are also expensive.

READ:  Why are rock climbing gyms so expensive?

Ideally, gyms should change climbing ropes every six months to maintain a safe environment. In reality, it depends on the wear and tears of each rope. For the belay, climbing gyms reverse the belay and tie-in sides from time to time to minimize wear and tear.

2. How often do climbing walls need to be replaced?

Even climbing walls have an expiry date.

Climbing gyms should ideally replace climbing walls every ten years to avoid safety issues. In reality, some walls last longer and others need replacement much sooner.

3. How long do lead ropes last?

We discussed this for gyms, but what about personal ropes for outdoor climbing? How long do they last?

The life expectancy of lead ropes depends on use. Lead climbing ropes can last ten years if unused before becoming structurally damaged. After that, they last 7 years (used twice per year), 5 years (used once per month), or 3 years (several times per month).