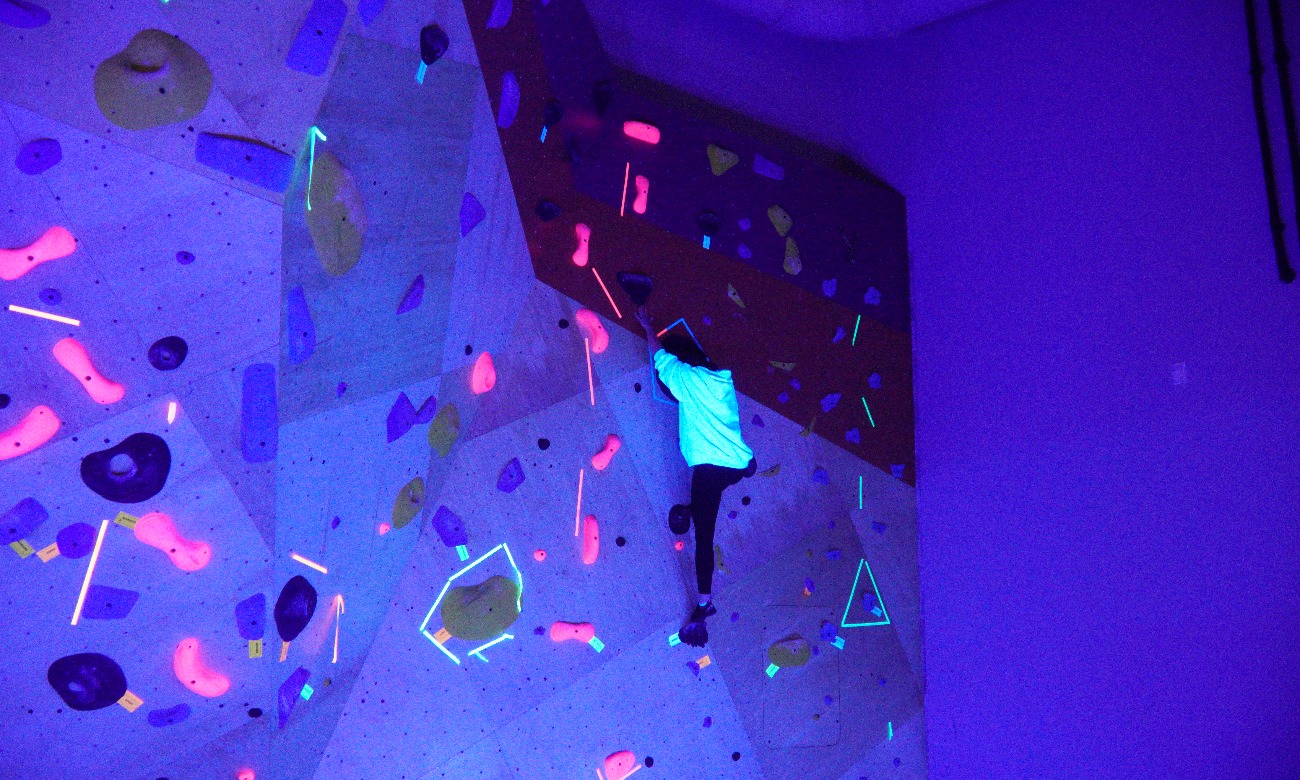 Choosing and buying the correct holds is the most important factor in the setup of your home rock climbing wall. Good quality holds are not only longer lasting, but you can also reset routes multiple times without wear and tear.

Beyond quality assurance, aesthetic and night training needs may play a role as well.

Yes, I’m talking about glow-in-dark or LED-compatible holds that can illuminate your wall when it’s dark out. They’re pretty awesome, but the problem is that sourcing top-quality LED climbing holds can be difficult.

Good news is, I bought a bunch, tested them, and prepared this list for you guys.

Glow in the Dark Climbing Holds to Buy in 2022

1. Premium: Glow In The Dark Climbing Holds by Atomik

Atomik makes the most premium glow-in-dark climbing holds for both kids and adults. Their holds are made of UV-stable polyurethane resin, which, according to Atomik, has the highest concentration of the best pigments in the US.

The special resin saves their holds from going “yellow” with time. Moreover, they allow you to custom order a glow-in-dark variant of any Atomik holds set that you may like.

Buys Glow In The Dark Climbing Holds by Atomik

At $30, Meliorinno’s 15-set glow-in-dark is an extremely cheap hold kit. The quality is surprisingly good for something that only costs $2 per hold. It’s probably possible due to the smaller hold size as they’re made and marketed for kid climbing walls.

They’re made of a strong and durable polyester resin, so they can easily handle an adult’s weight as well. Meliorinno has ergonomically designed them to be sharp-edge-proof and slip-resistant.

Greengrip is a company from Finland that makes these intriguing environment-friendly holds from a novel polymeric material.

These holds are cast from natural rocks without sharp edges. It’s what gives them a realistic and natural texture. More importantly, they’re 100% recyclable if you’re into saving the environment.

Greengrip glow-in-dark holds can light up to 24 hours after a mere 15-20 minutes of exposure to artificial light.

READ:  Everything You Should Know About Holds for Your DIY Climbing Wall at Home

First, we gather all the materials, including bolts, t-nuts, a polyurethane resin of your choice, silicone, casts for making molds, PCB boards, resistors, capacitors, LEDs, and connectors.

Next, depending on your choice and needs, you should get some optional stuff, such as an IR controller for normal LEDs or a ZigBee hub for smart ones.

Once you have these materials, we can begin using our casts.

You can use Oomoo 25, solid tin-based silicone that cures in about 2 hours without requiring heat. Oomoo 25 is good since you don’t need extra support for keeping the molds in shape.

Although it is slightly expensive since you’ll be wasting a lot of material while molding. You can also look at Rebound 25, which comes in a liquid-like form and requires you to fill layers of silicon.

Since it’s not solid, Rebound requires support but saves you some bucks on material wastage.

Next, you must prepare your PCB boards by soldering the LEDs onto them and the correct combination of resistors and capacitors.

If you don’t own a soldering iron, you can just get this part done from a workshop. They’ll be able to do it much more cleanly for you. Although, it might cost you more than it would if you had just tried learning how to solder instead.

First, put the PCB board with LED inside the mold and ensure it’s wired properly to the controller board. And put the washer and bolts in their respective positions.

Next, start pouring your resin solution into the mold. Finally, let it sit for some time. Depending on the resin type, it could take anywhere from a few minutes to an hour. Once done, take your hold out and make the finishing touches.

At last, set your route. Ensure all the wires are connected properly, or you’ll fry the LED. And light your home climbing wall with DIY LED holds.

If you don’t have the time or skills to make your LED holds, Atomik has made the perfect product for your kids (and adults) – water clear climbing holds.

These are made from a special resin that doesn’t allow the LED light to pass through. Instead, it diffuses the light to capture its luminescence.

It’s not a “smart” (IoT) product because each hold depends on the LED behind it. Although if you choose to put smart LEDs, you have the coolest climbing wall.

They also provide a complete wall-hold setup called the “Kilter Board,” but it ain’t cheap.

What do the different color hand holds mean in climbing?

READ:  How do climbing gyms set up and grade their routes?

You must’ve already noticed that Atomik’s Water Clear are all the same colors without LEDs. How will that make a difference? Can you only use them at night, or do the colors not matter?

If you want, you CAN use them in the daylight, but colorless holds make for a confusing (or quite challenging) rock climbing wall.

In rock climbing, green holds are the biggest and easiest (made for beginners), and yellow holds are made for intermediates, making them smaller and challenging. And the red ones are for advanced techniques.

The easiest holds are whites in bouldering, where grades are not categorized. They’re followed by green, yellow, and red though sometimes blue holds come between yellow and red. Finally, orange holds are V10+, and black holds are for comp style.

1. How many climbing holds do I need?

On average, you should have about 1 to 3 holds for every 2 to 4 square feet of climbing area for adults. It usually depends on the climber / setter’s preferences, whether they like multiple intertwining routes or a couple of separate ones.

2. How expensive are climbing holds?

Rock climbing holds are bought in bulk, and a standard kit usually costs around $1 to $10 per hold. The exact price primarily depends on the shape, size, and build quality. Some premium holds even retail for $100. You can get good glow-in-dark holds for about $2 to $5.