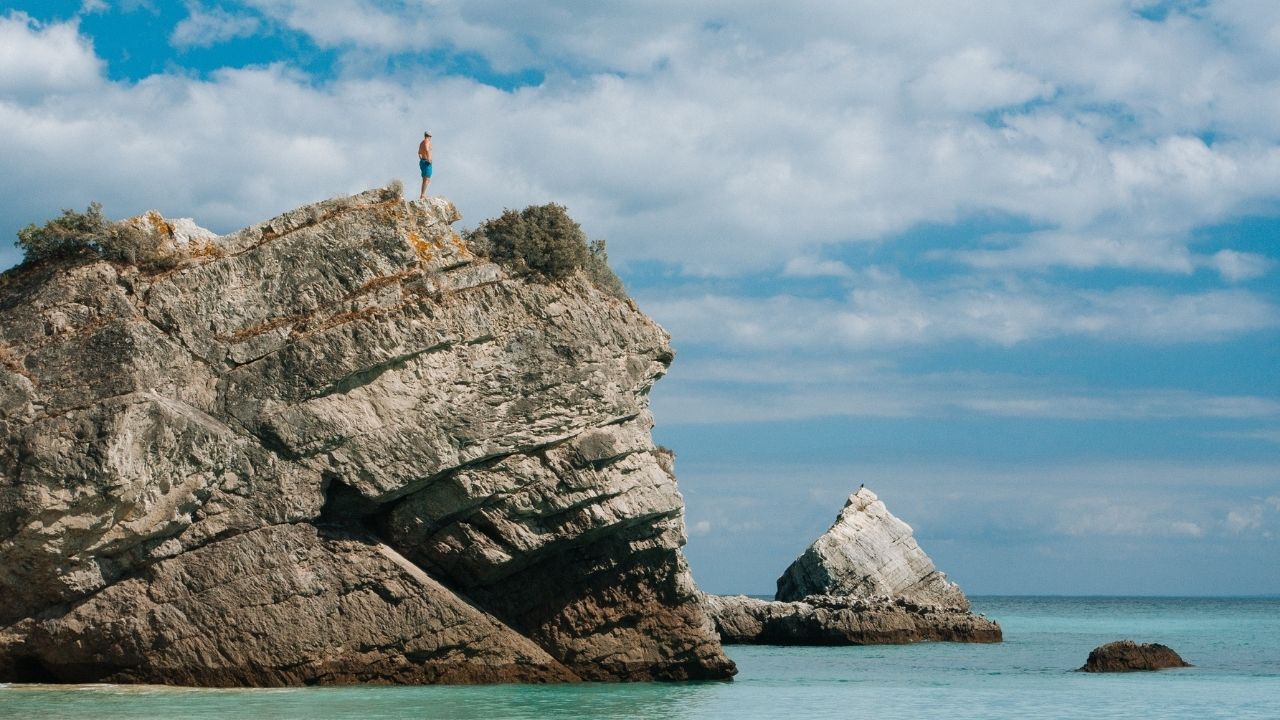 Deep Water Solo Climbing is one of the purest forms of climbing. It’s the adrenaline rush you get when climbing without support equipment that makes soloing so “extreme.”

But if you’ve ever checked out any bouldering or rock climbing forums, you may have noticed that people are constantly asking for good psicobloc-ing locations. It’s interesting because solo climbing is supposed to be so accessible, right? You just need a decent rock and enough depth of water.

Well, today I’ve compiled a quick list of the best soloing locations in the world that have a mix of epic soloing opportunities and beautiful panoramic views.

In no particular order, here are ten of the best spots for deep water soloing (DWS) and adventuring around the crag.

Pro Advice: Always go deep water soloing with a guide (or atleast a guidebook like Rockfax) so that you know about starting points and exits. Also, some countries have specific bans about soloing so a legit guidebook is key.

The city of Majorca (Mallorca) in Spain is literally the birthplace of Deep Water Solo Climbing or “psicobloc” as it is locally known, which translates to “Psycho bouldering.”

While most of the spots in Mallorca are for experienced solo-ers and exports, there are a few crags for beginners, such as Cross in Santa Ponsa or Cala Varques on the east coast of Majorca.

Mallorca’s hardest soloing route, Es Pontas (9b), made soloing famous in the U.S. when it was first conquered by an American climber, Chris Sharma. The route hasn’t been done ever since!

The routes in Mallorca are graded by the French grading system that goes from S0 to S3, S0 being the easiest and S3 being the hardest.

Cliff diving is the most popular extreme sport in this part of the world, with an average cliff height of 60ft. But the same coastline of Azores (Portugal) is also known for its beautiful DWS locations during the summer.

The climbing crags are mostly made of volcanic residue, which makes them perfect footholds for climbing.

You’ll need to rent a raft to reach most of the climbs here, but it’ll undoubtedly be worth the effort. The only concern about this coastline is that it can be a bit dangerous during the high tide, which is a minor issue that can be resolved by consulting locals.

Ps…you can take part in both the top 2 activities – all you gotta do is solo climb hard and then cliff-dive even harder!

READ:  Is Deep Water Soloing Dangerous? Is It Safe for the Average Joe?

Railay (Thailand) is known as the soloing crag with the most beautiful scenery in the world. And, quite frankly, the cheapest place for Deep Water Solo Climbing.

It’s so beautiful that Redditors call it a “tourist trap” because some tourists spend more time sitting around and enjoying the views than actually climbing.

The best crags for soloing in this area are in Railay Beach and Tonsai Beach. Although, it seems like the Thailand government has banned deep water soloing in some parts of the area.

According to various sources, the sport has been forced “underground.” Still, the experience remains the same thanks to local residents willing to help you reach the soloing crags.

This reminds me, you’ll need a boat to reach the crags as they’re not accessible by land. Though that’s not an issue since the logistics are pretty cheap (less than a dollar per person).

Contact: Basecamp Tonsai is considered best for DWS guidance and other activities in Railay.

Diving is a lot more prominent in Hawaii than deep water solo climbing. But that doesn’t mean that the crags in Hawaii are less than any other popular spot on this list.

There are countless beautiful and suitable crags for soloing in Hawaii. Ka’anapali, Maui, and South Point, Hawaii are known as the best-of-the-best among climbers.

While there are other good Deep Water Solo Climbing locations in the US, you simply can’t go wrong when it comes to the crags at the Island of Hawaii. The beauty of the Black Rock (Ka’anapali) is often compared to Ha Long Bay in Vietnam.

You can also do Sea Level Traversing at South Point because the water isn’t too deep, and the cliff is only 40ft above the water. Drive down to the southernmost point, take a fork right (opposite Green Sands), and park near the cliff. Then just jump off and start climbing.

There are over 120 climbing routes on 13 different Deep Water Soloing crags in Ha Long Bay at Cat Ba Island. You can reach the Cat Ba crags by staying on the southernmost part of the Island.

You can either sign up for an individual climbing trip or just meet other climbers and make joint trips while you’re traveling.

Check this complete guide to climbing in Ha Long Bay for more info.

READ:  Beginner’s Guide to Deep Water Soloing (Psicobloc): How & Where?

Blue Grotto and the Comino Islands in the Republic of Malta (Europe) are pretty famous among European and African solo climbers. Rumor has it that the Blue Grotto caves were featured in the movie Troy because of their beauty.

You can get to Mistra Bay and Blue Grotto by either taking a bus or a 25-minute boat trip. But if you want to go to the Santa Maria caves of Comino Island, it’s just a short climbing trip from the foot of the cliff.

Also, the locals and frequent climbers believe early mornings to be the best time of the day for psicobloc-ing at the Blue Grotto.

Here is some more info on the climbing locations in Malta.

Yes, we’re talking about the allegedly magical place in the Middle East, Olympos (Olympus). Another good aspect about the crags in Olympos is that they’re accessible year-round because the water temperature remains constant. So, you can plan your trip anytime you want.

Olympos can be located 30-40miles south of the Antalya Province in Turkey. The crags here could be called the “Jack of all trades” – it’s not the best location for any particular sport but it certainly has all of ‘em in the right amounts.

Read More: Is Deep Water Soloing Dangerous? Is It Safe for the Average Joe?

There are other popular locations to check out if you’re planning a trip there.

Ps…don’t think that these three are any less awesome than the rest – these are truly the top 10 locations in the world after all!