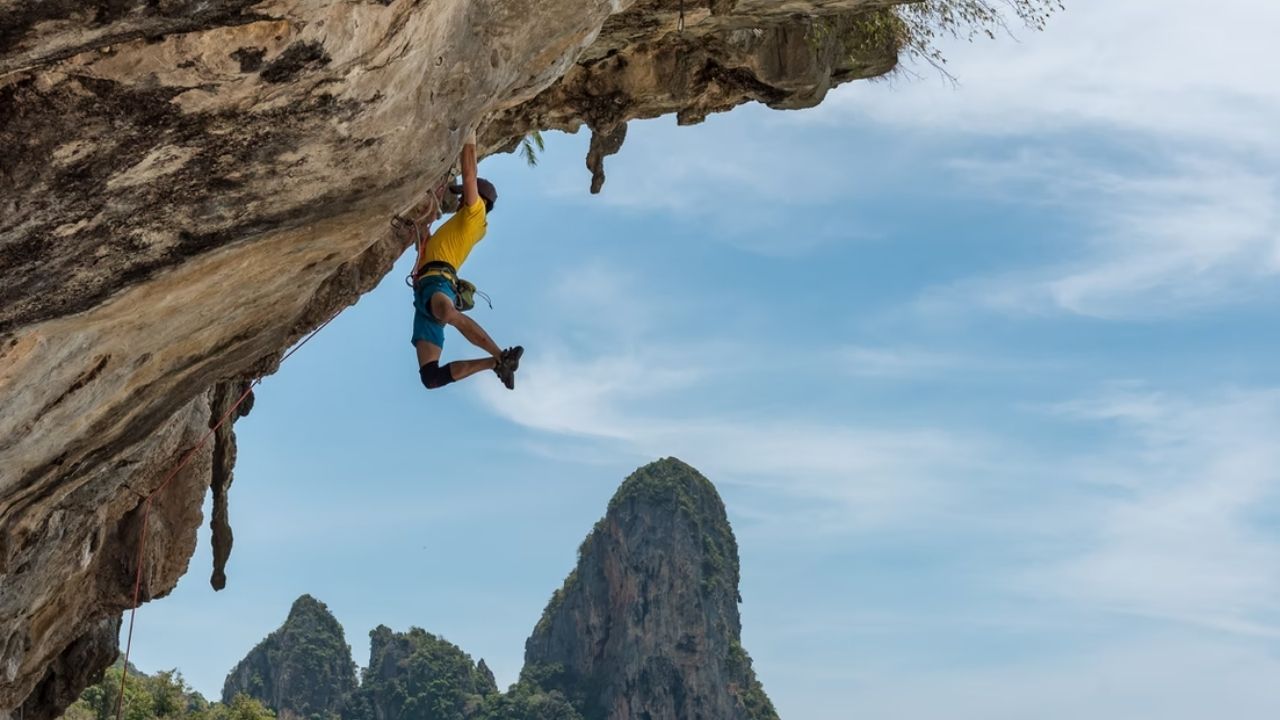 It’s so important to be able to send routes when rock climbing and bouldering because it builds the will to continue. But today, we’re going to discuss the exact opposite of willpower. In fact, we’re going to look at savage routes that’ll likely make you want to toss in the towel like never before.

After extensive research (and word of mouth), I’ve compiled a list of the world’s 8 hardest and grittiest rock climbing spots in the world.

We’ll use the United States grading system, the Yosemite Decimal System (YDS), which assigns a number to a climbing route between 5.0 and 5.15 based on difficulty. Basically, the higher the number, the higher the complexity of the route.

The Shark’s Fin at the Meru Peak is located in Gangotri National Park in the Uttrakhand city of India. The Fin is not your average route, it’s completely different from the rest you’ll see on this list.

Dozens of climbers and mountaineers have been trying to reach the summit of Meru Peak – a 21,000-foot tall mountain. And to do that, they first need to ascend the gnarly climb of Shark’s Fin by climbing through the ice at a temperature dangerously below zero degrees.

The trio of Anker, Chin, and Ozturk first tried this vicious climb in 2008 but gave up along the way. They finally ascended the climb in 2011 and continued climbing to become the firsts to ever reach the summit of Meru Peak.

La Rage d’Adam, located in Verdon Gorge (France), is arguably the most infamous climbing route in the world. It’s not only quite steep, but the boulder problems will require complete mastery of some problematic moves such as knee Klemmer.

The hardest route in France was bolted by Antonin Rhodes, after which Adam Ondra and Seb Bouin made it their project in 2015. It took Bouin four years of not giving up to finally ascend the mighty route.

But what makes this route interesting is that Adam never ascended it. Ondra, unable to climb the central crux, gave up on the project and moved forward. Bouin aptly named the route La Rage d’Adam which literally translates to “Adam’s Rage.”

READ:  What are the best rock climbing cliffs in the world?

Vasil Vasin is the fourth and final route in the dreaded 15.15c category. It is located near Sloup – a limestone crag in the Brno region of the Czech Republic. And who better to bolt and send a famous Czech route, if not the Czech prodigy Adam Ondra.

Adam bolted the climb back in 2008, after which he got busy with other projects. Following the momentum from Change and La Dura Dura, Ondra officially ascended his third 5.15c route on December 4, 2013.

Perfecto Mundo, located in the Margalef region of Spain, is the gateway for other pro climbers into the world of prodigies. Even with a backbreaking rating of 5.15c, Perfecto Mundo is relatively easier than La Dura Dura and Change.

And like many others, it was originally Chris Sharma’s project. He bolted the route in 2009 or 2010 but never had the time to send it.

So, Perfecto Mundo stayed there for another nine years until Alex Megos became the second climber in 2018 to ascend a 5.15c route after Adam Ondra’s “Change.”

According to Stefano Ghisolfi, Mundo is different from La Dura Dura that requires a certain height. Some of the pitches in Perfecto Mundo are so narrow you can’t fit more than a finger. You need “acrobat-like abilities just to contort your body around its unforgiving edges,” said Stefano.

READ:  Quick Guide to Best Deep Water Solo Climbing Locations in the US

La Dura Dura, which literally translates to “The Hard Hard” in Spanish, is located in the Oliana region of Catalonia (Spain). La Dura Dura brings certain ease to the climbing world. It’s not only the second 5.15c route but the first of the 5.15c category to be repeated (you’ll understand its significance in #3).

It was initially the project of Chris Sharma, who bolted the pitch in 2009, but it was first ascended by Adam Ondra in February of 2013. Needless to say, Chris ascended the route a month later, in March 2013.

The La Dura Dura is on a limestone cliff and demands a certain height from the climbers to be sent thanks to the massive move to a crimp that forms one of the cruxes.

The Change is one of the most popular routes in this list because it was the first route to get rated 5.15c which was a big thing back in 2012. It is located in the Hanshallaren Cave of Flatanger, Norway.

The 5.15c rating was given to Change by Adam Ondra, who first ascended the route in 2012 at a marvelously young age. The Czech climber was only 18 when he set himself apart from other professional climbers.

What makes the Change so infamous is because it has only been ascended once. Yes, it’s only the second most challenging route (third in this list) globally, and Adam has already moved on to another.

Another deadly route in Norway that almost made the list was “Move.”

Silence is arguably the hardest and most dangerous climbing route in the entire world. In fact, this treacherous 5.15d route has never been sent more than once. It took every ounce of the prodigal skills that Adam Ondra had to send “Silence,” which is located in the Hanshallaren Cave of Flatanger, Norway.

Wath this video to see how Adam struggled with the “Silence”:

For context, there’s a move during the second crux that borders on almost dislocating your knee, and Adam insists there’s no other way. Silence is the only route in the world to have a 5.15d confirmed rating, and that’s because it has three cruxes. And all three are high-grade boulder problems.

Ondra says maintaining your energy throughout is the key to sending Silence. The entire route is so complex that one slight misstep becomes a domino effect. Ondra first bolted the route in 2012 (and 2013), but it took him 5 years until September 3, 2017, to send this route.

The competition for the #1 spot between Dawn Wall and Silence is fierce but inconclusive. While Silence does have a higher YDS grade, Dawn Wall is statistically more complicated.

This is because the Dawn Wall is said to have more climbing pitches than all the climbing routes combined in the El Capitan of Yosemite National Park. And that’s just the start. This scary rock climbing route is also not in some cave, but it’s literally a giant rock wall 3,000 feet above the water.

To give you some context, Adam Ondra, the rock climbing prodigy, took eight days to properly climb the Dawn Wall, after which he confirmed that it was the hardest free climbing wall in the world.

So, you think you’re gonna try to send any of these crazy spots anytime soon? Or will you opt to tap into the imaginary adrenaline you got just from reading about them?

For more “best of” lists for your favorite adventure sports, go check out these handpicked lists of the best places to visit around the globe and in the United States.