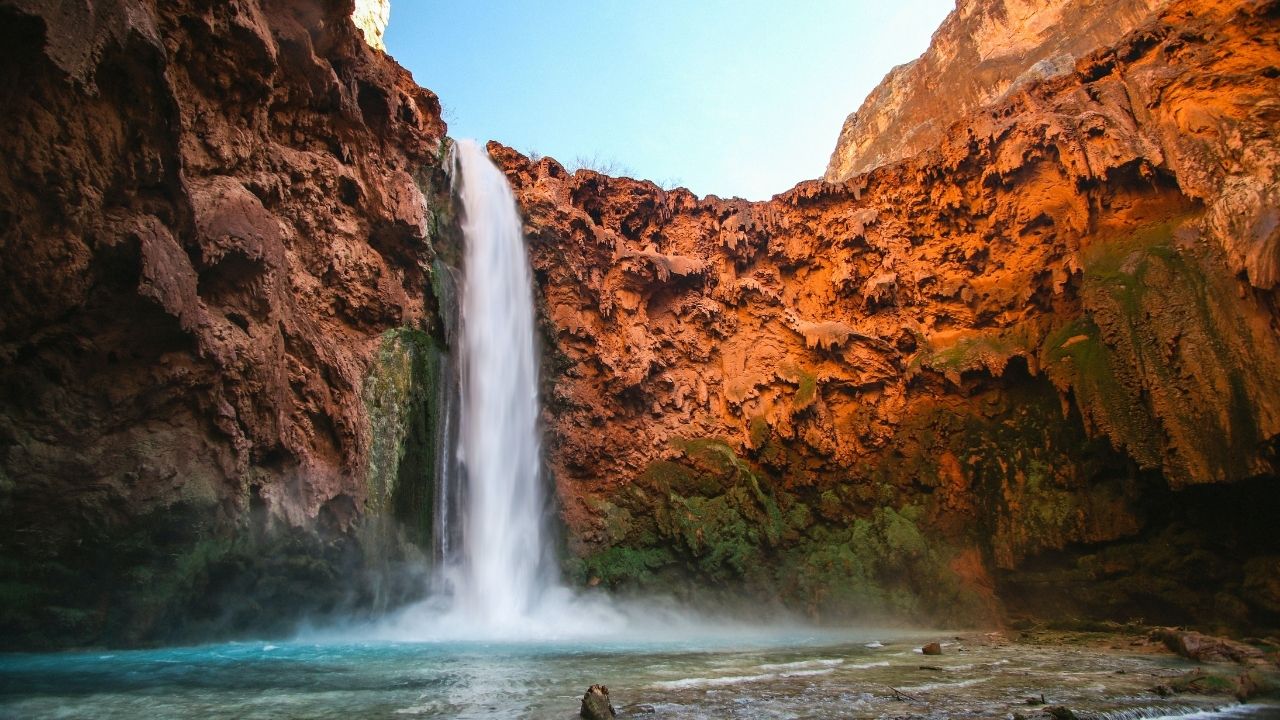 I’m a rock climbing and bouldering guy – loved the thrill since my first outdoor climb and always will. In fact, rock climbing is what got me into waterfall rappelling in the first place.

What is more exciting than climbing gigantic cliffs under beautiful panoramic views and sometimes over the ocean (like in DWS)? Waterfall Rappelling.

You are rappelling down those massive cliffs above the lake with a fast stream of whitewater pounding on you. At the same time, you try to maintain balance on the slippery moss-covered rocks. It’s an experience that you’ll never forget.

Here are 10 of my favorite waterfall rappelling (and canyoning) spots in the world:

The best waterfall rappelling experience for me was definitely the Victoria Falls at Guanacaste and the North Pacific a couple of years ago. We went on a 45-minute-long horseback ride to reach the top of the cliff before the downclimb, and it was beautiful.

Indian Falls take the thrill one step further with its 90-foot monkey drop into the water. You should visit Arenal Falls if you’re canyoning for its 150-foot and 210-foot options for waterfall rappelling.

While Spain doesn’t have any particular waterfalls that stand out, its Almanchares Canyon offers a richer and more versatile experience than other sites on this list.

The Sierra Tejeda National Park, located approximately two hours north of Malaga Province, is known worldwide for its fourteen rappelling courses for both beginners and experts.

While Almanchares and the nearby Las Buitreras are popular among tourists for the beautiful canyons – you can visit the high waterfalls in Barranco Moreno after you’re done with Sierra Tejeda.

Canada’s Vallée Bras-du-Nord is located 37 miles north of Quebec City. From there on, you’ll go on a 45-minute hike through the almost magical forest to reach the Easter Island Waterfall.

The drop is only 49-feet, so go crazy! The course is organized by Canyoning Québec, so you’ll have to contact them beforehand. While the waterfall doesn’t compare to Spain or Costa Rica – the Vallée Bras-du-Nord itself is a wonderful experience, and I recommend you try it out at least once.

Ps…the course is quite complex, so don’t go to Quebec City if you just started rappelling.

READ:  What is the most dangerous whitewater rafting in the world?

Frankly speaking, you can’t go wrong with India when it comes to extreme water sports. The Land of Diversity and Festivals has three of the best waterfall rappelling spots in the World.

The Jogini Waterfall in Manali (Himachal Pradesh) is the most dangerous and challenging rappelling spot in the country. The hiking starts from the Vashista Temple at Mall Road and goes through apple orchards and pine forests to the 200-feet high Jogini Falls.

Kundalika Falls in Bihar go as high as 150-feet and are an excellent choice if you’re a fan of water sports. You must try whitewater rafting and psicobloc-ing if you’re ever there. And, the third location is Dodhani Falls in Maharashtra.

The Island of Hawaii comes at least once in literally every list I make for extreme sports locations in the world. Although, this time, it’s for experts only.

The Maui Waterfall in Hawaii is the best waterfall rappelling location in the United States. The downclimb is incredible, but the tour itself is not for beginners. Only advanced rappellers can do it because it demands a lot of canyoneering.

The Maui waterfall has three different routes: 60-foot practice run, 50-foot, and 30-foot waterfalls. The Ripley Falls in New Hampshire has a single route of about 100 feet.

There is a small pool at the foot of the falls that is excellent for rappelling and cooling off. Ensure your tour guide knows about it because days can get quite hot in Central America.

Colombia houses some of the best waterfall rappelling spots in South America. The Cascada de Juan Curi at the Juan Curi Park is flooded with tourists during peak seasons. So you’ll have to time your adventure to avoid waiting in queues. The good thing about Juan Curi is that it has the Colombian Waterfall, and the entry is pretty cheap.

After a quick 25-minute trail / hike at the Park, you’ll reach the 195-foot waterfall, where you can downclimb to your heart’s content.

Mount Olympus in Greece is one of my favorite holiday destinations because it’s a premium location for waterfall rappelling, rock climbing, and deep water soloing.

Olympus and Kissavos have the popular Kakoskala and Kalypso canyons which are suitable for both rappelling and canyoning.

While the Kalypso canyon has a long but easy waterfall for rappelling, Kakoskala has so many waterfalls that they had to be divided into five different sections. The whole tour should be spread over several days to avoid mishaps.

What can top the fourteen waterfalls of Amancharesn Canyon (Spain)? The sixty waterfalls of Baños de Agua Santa in Central Ecuador. Banos is probably the second most popular location after Costa Rica for waterfall rappelling.

Though some of the credit for that goes to the “Swing at the End of the World of Banos,” where you literally dangle on a ledge at the edge of a cliff overlooking the beautiful and lush canyon.

All you need is a local tourist with good enough English (unless you know Spanish), and you’re good to go.

Have you ever noticed that place in your Instagram feed where people are constantly jumping off these beautiful waterfalls and cliffs? That’s Bali.

Bali is one of the most popular tourist spots globally, with beautiful waterfalls and beaches in all four directions.

I suggest trying out the GitGit Waterfall and Niagara Munduk, even though you can go whitewater rappelling just about anywhere in Bali. And don’t forget to check out the majestic NungNung Waterfall if you’re ever in Bali, but it’s not suitable for rappelling.

Difference Between Waterfall Rappelling and Canyoning

Here’s a quick difference to help you plan your next adventure:

Canyoning is when you don’t follow the same route twice. Instead, you’d do hiking, down climbing, rappelling, river crossing, and even zip-lining and experience the “entire canyon” to reach the top of the waterfall.