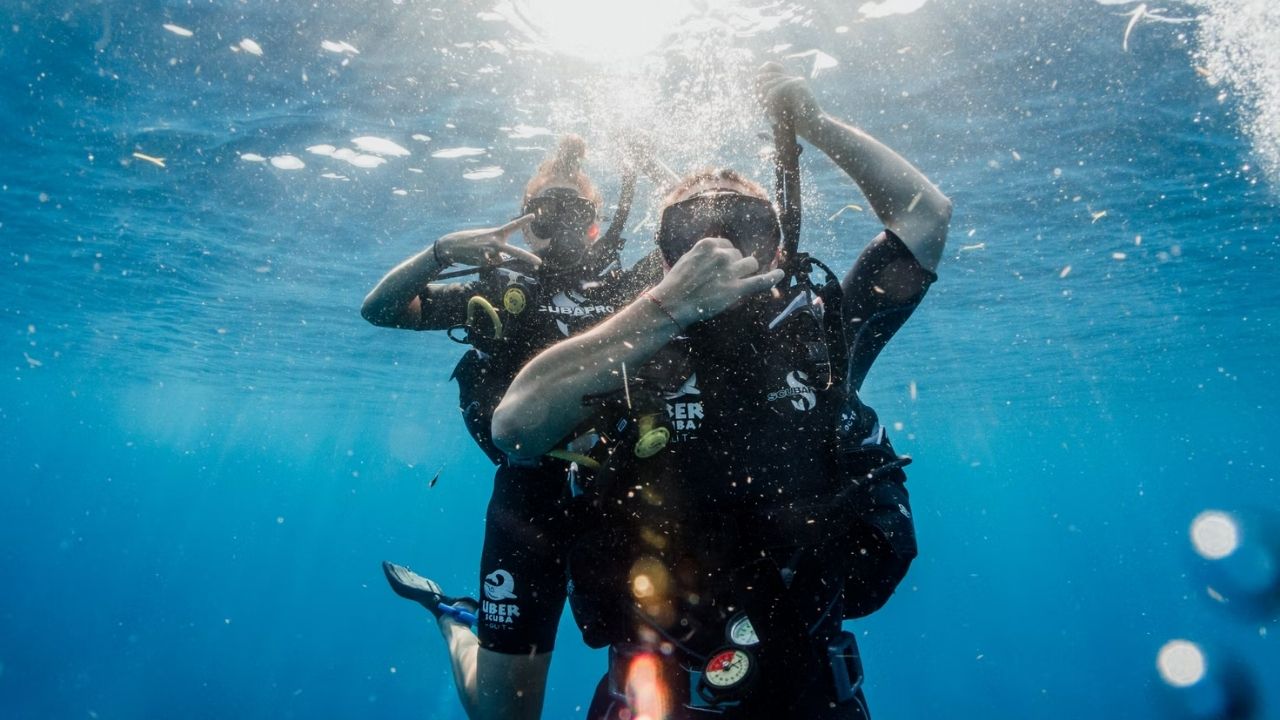 Scuba diving looks like an expensive hobby, but divers know how unique the extreme sport is. Unlike swimming and water sports, scuba diving is comparable to skydiving because of the views and unique perspective of the world it provides.

Knowing about marine life and experiencing it first-hand are two different things. “Swimming with tiger sharks” isn’t just a meme but a dream for many scuba divers.

So what are the most exhilarating scuba diving locations in the world? Let’s find out.

Malapascua in Phillippines is one of the best scuba diving locations in the world. It’s popular among divers for thresher sharks. It’s also why Malapascua stands out among other diving spots like the Secret Bay and Linapacan Island in the Philippines.

If you’re into macro (muck) diving and photography, visit Secret Bay (local name: Mainit Muck) in the Anilao region. The shallow diving spot may not be the deepest (between 10ft – 70ft) but offers unparalleled beauty. The Secret Bay is well-known for housing a rare collection of small aquatic life species like shrimps, crabs, and small squids.

Dumaguete and Linapacan Island are two other famous spots. The former is known for its diving variety. The latter is one of the clearest scuba diving spots in the world. Linapacan Island is 200 miles from the coast of Palawan Island, which was voted as the most beautiful island on the planet in 2020.

Basically, the Philippines has LOADS of excellent scuba diving spots.

You can also dive and swim with bull sharks, whale sharks, and nesting turtles if small technical skydiving expeditions aren’t your thing.

Speaking of Yucatan’s Cenotes, you must visit the Angelita near the Tulum region. At about 100ft deep, you can experience its unique and almost magical beauty. You dive in the clear freshwater that’s separated from the saltwater below by a layer of hydrogen sulfate. It’s like swimming above the clouds, just under the water.

The Socorro Islands (or Revillagigedo Archipelago) is another famous spot worth diving in Mexico.

Raja Ampat in the Komodo region of Indonesia is a must-dive location for every scuba enthusiast because of its wide variety of aquatic fauna. One of its diving spots, Cape Kri, has a record of having the most number of fish species in a single diving site.

After Raja Ampat, head south to Misool Island, famous for being some of Indonesia’s most beautiful underwater spots. Other popular Indonesian scuba diving spots are Lembongan in Bali (famous for its manta sightings) and Lembeh in Sulawesi (the muck diving hub of Indonesia).

If you want to scuba dive for some rare endemic species, look no further than The Galapagos Islands in Ecuador. The islands are isolated and preserved from human foliage as they’re about 560 miles far from the coast of Ecuador.

The Galapagos Islands are widely popular as the most immersive scuba diving spot globally, thanks to its uniquely versatile diving experience. Its isolation helps a LOT of species survive in the Galapagos. You can dive with whale sharks, manta rays, sea lions, hammerhead whales, iguanas, penguins, and more.

After reaching the islands, head towards Wolf and Darwin Islands to see scalloped hammerheads, silky sharks, and manta rays. Or go to the Punta Vicente Roca to watch Ecuador’s mysterious Mola Mola.

Jardines de la Reina in Cuba is home to many of the world’s shark species. Dive in the Garden of the Queens Marine Park to swim with silky sharks, hammerhead sharks, lemon sharks, and Caribbean reef sharks.

Additionally, Cuba has a humongous amount of protected water (about 850 sq. miles) that contains one of the largest coral reef systems in the world.

Australia’s Great Barrier Reef is the largest coral reef system in the entire world. It provides a breathtakingly beautiful scuba diving experience. You’ll need a live board for the full experience because the famous spots like Ribbon reefs around Lizard Island are off-shore.

Though it’s worth the effort because their isolation from human activity keeps the original reefs intact. You’ll be surprised at the kind of uncommon species you’ll meet in The Great Barrier Reef.

READ:  Find Out Medical Conditions That Might Stop You From Scuba Diving

The Red Sea is the most amazing scuba diving spot in the Middle East. The Red Sea is known for sightings of endemic species and beautiful underwater scenes. That’s why I’ve mentioned four different countries to include the entirety of the Red Sea.

The Red Sea has so many popular scuba diving spots that it’s difficult to put all of them in the guide. Some of these are the SS Thistlegorm (Ras Mohamed), Tiran (Sharm El-Sheikh), Hurghada, and beyond.

Scuba diving is available throughout the year, but you should go between March-May or September-November as the colder and hotter seasons aren’t favorable here.

You won’t find Russia’s Lake Baikal in the list of the world’s top diving spots. But what chance does the world’s best have against a place you might end up falling in love with?

Lake Baikal in Russia is one of the most beautiful scuba diving spots in the world. With an astounding depth of over 5,000 feet, Baikal is the world’s deepest lake. It’s home to 20% of its entire freshwater marine life that you won’t get to see anywhere else.

Plus, it’s one of the clearest lakes in the world!

If scuba diving is one of many goals for your next adventure, you can also consider these four holiday destinations. Their diving spots are pretty comparable to the best in the world.

Well, these were the best scuba diving spots for your next trip. Of course, there are at least a dozen more spots like Palau (Oceania) and Manta Night Dive (Hawaii) that are just as good, so be sure you pick one that checks all of your boxes.