How fast can you paddle a whitewater raft? Are pack rafts faster? 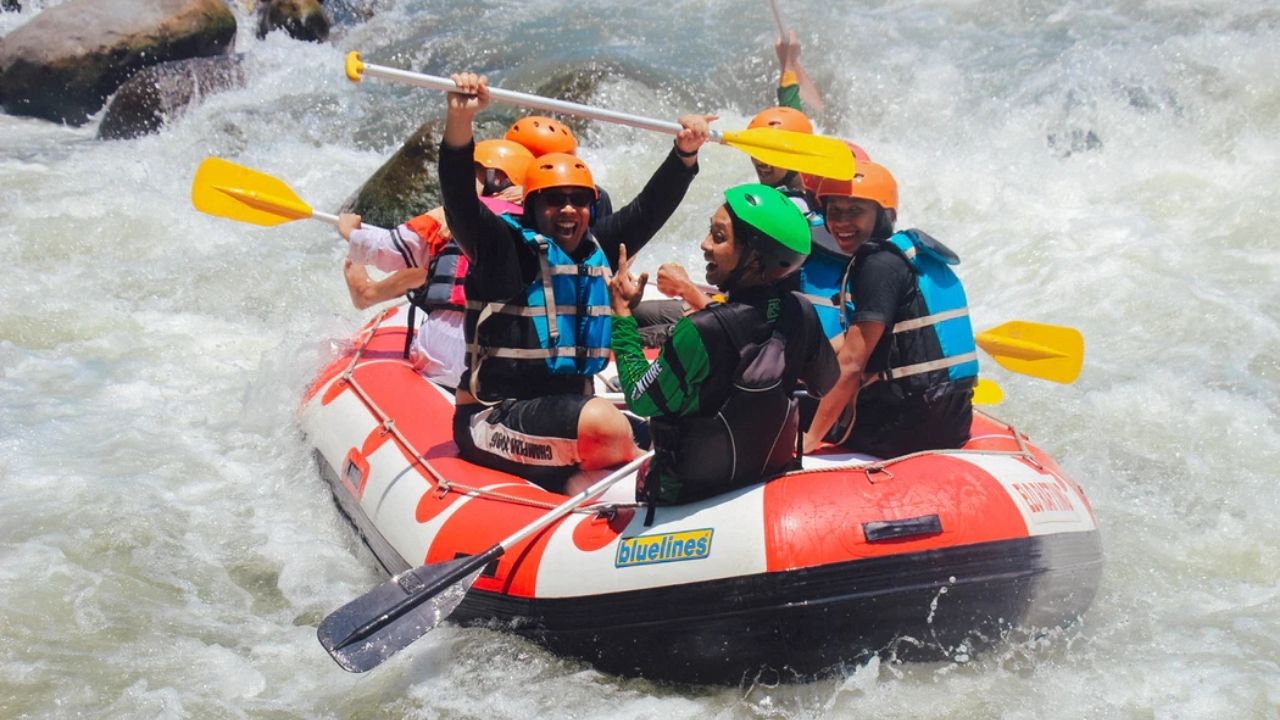 Whitewater rafting is one of the most legendary adventure sports I’ve ever participated in. I love skydiving and have jumped from thousands of feet above so many times without feeling any sense of danger. But whitewater rafting is a whole different ball game.

So, how fast can you really go? And more importantly, how can YOU achieve that speed? Let’s find out.

Contents
How fast can you go on a white river raft?
1. Class of the Rapid
2. Flow and Volume of the Current
3. Stream Gradient
4. Wind Speed & Direction
5. Your Carrier – The Raft
How difficult is whitewater rafting?
Whitewater Rafting Classifications
1. How much experience do you need on each rapid?
2. How long does it take to whitewater raft?
Can you whitewater raft without a guide?

How fast can you go on a white river raft?

In whitewater rafting, you can go as fast as the speed of the rapids you’re rafting in, provided that you’re going downstream in a self-bailing raft. Once the two conditions are met, your speed will depend on the flow of rapid, its gradient, wind direction, boat dynamics, and paddling skills.

Self-bailing is the ability of a raft to bail the water out automatically so you wouldn’t have to paddle and bail water simultaneously.

In fact, you can get self-bailing installation kits made in a DIY fashion so that you can attach one to your usual raft and make it self-bailing. This feature is achieved by having an inflatable bottom (about 4-5” thick) and draining holes at the upper end of the raft.

Circling back to the main point, the key to going “as fast as you can” in whitewater rafting is to first choose a suitable river and rapid. Here are the five factors that determine the speed of a rapid, and by extension, the speed of your raft:

1. Class of the Rapid

Obviously, your rapid classification will determine your top speed. In class III and III+ rapids, you can achieve the top speed by just paddling along and listening to your guide. But things don’t go as easy with class IV onwards.

For class IV and V rapids, you’ll have to scout the area first (provided your guide is an experienced class V rafter). By scouting the area beforehand, you’ll avoid any surprises that could slow you down in such an intense stream.

READ:  What is the most dangerous whitewater rafting in the world?

2. Flow and Volume of the Current

The flow (volume of water per second) is also a major contributing factor determining your top speed.

Without going too deep into high-school grade fluid dynamics, the flow of the water stream (calculated in feet per second) will increase if the volume of water is relatively greater. This is because an increase in volume would mean an increase in the water pressure since the depth and width of the river is constant.

You’ll need some scouting and experience to gauge this one, but the signs are pretty straightforward. For example, the flow rate will be higher when it’s raining.

That said, I wouldn’t recommend betting on pre-existing knowledge because the flow can even change throughout the day if the river connects to a dam.

The gradient is a significant factor when it comes to speed in fluid dynamics. It’s the ratio of drop in elevation per unit horizontal distance.

In layman’s terms, if you look at a small cross-section of the entire river, it’s the elevation change from water being put in and getting taken out. Generally, a gradient of 300 feet per mile makes for a raft-able river.

Even kids know that you can’t determine the speed of a “boat” without talking about the wind.

I know what you’re thinking, “why does wind speed matter when rafts don’t have a sail?” Then I bet you haven’t tried pedaling a raft downstream against violent upstream winds.

Many rivers in the United States are notorious for their afternoon winds that almost always blow upstream. Winds around class IV and V rapids can be strong enough to blow you away in the opposite direction.

Such instances require good scouting, accurate decision-making, and execution by you and your guide.

Finally, your raft also makes a difference. For example, some self-bailing rafts are infamous for pulling water inside when moving too fast. They’ll undoubtedly go fast but won’t achieve the theoretical top speed that way.

Boat design and material are two of the biggest factors. Because a boat designed according to the fluid-dynamics principles would go faster than others even with less effort. Also, keep the load you’re putting on the weight in mind.

How difficult is whitewater rafting?

As rafting.com puts it, “whitewater rafting is challenging but not overwhelming.” And honestly, I wouldn’t have it any other way. Who wants to do an easy extreme sport anyways?

Whitewater rafting is a pseudo-difficult sport. While class I and class II rapids are family-friendly, the difficulty of class III, IV, and V rapids will increase (or decrease) based on your level of experience, skills in handling a raft and pedaling, and your physical condition.

By “physical condition,” I don’t mean you have to be a buff guy, but you need to be healthy with a certain level of strength.

READ:  How to prepare for a whitewater rafting trip? Everything You Should Know

By now, I’ve used phrases like “class I rapids” and “class III rapids” multiple times, but what does that actually mean?

Whitewater rafting locations (rivers) are divided into various rapids – they’re the sections of the river that serve as a route for the rafting trips. These rapids are classified based on their difficulty, with Class I rapids being the easiest and Class V being expert-only territory.

And just in case anyone tries to get smart with you, there are some “class VI” rapids with such harsh environments that they’re potentially unnavigable. But class VI isn’t officially used when talking about whitewater rafting.

1. How much experience do you need on each rapid?

In short, the fastest whitewater rafting can be done in class IV and class V rapids, provided you have the skills to make an attempt. Some class III rapids in the U.S. are also very fast. They can serve as training grounds for your ascension to a higher class.

2. How long does it take to whitewater raft?

Express whitewater rafting trips tend to last at least 2-3 hours, while one-day or full-day rafting trips can last as much as 5-7 hours, depending on your plan and package. Although the thrilling and challenging part of each rapid only lasts from 5-10 minutes.

Can you whitewater raft without a guide?

Some whitewater rafting facilities allow you to go rafting without a guide, while others don’t. It’s recommended to always have a guide with you unless you have familiarized yourself with the particular rapid. Even experts can make dangerous mistakes on an unfamiliar route.

Long story short: it’s possible to go quite fast in whitewater rafting if you follow these instructions and prepare appropriately.

But before all that, remember the golden rule of whitewater rafting. Don’t trust anyone when hiring a guide. Vet all the information and certificates yourself to get the most out of your experience while also staying safe.