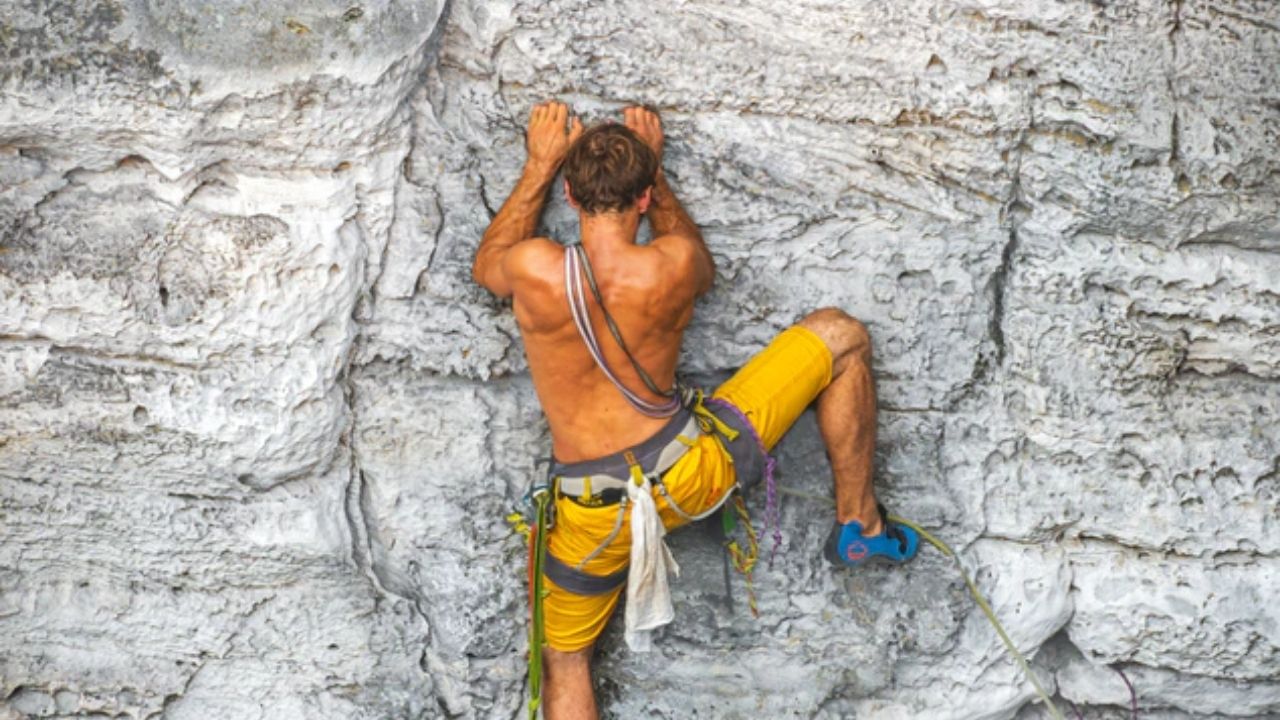 When I was rock climbing with my buddies at our local climbing gym last week, I had a slight equipment glitch. No one was hurt, but it got me thinking about how dangerous rock climbing really is?

Trust me, I love to enjoy a good time, but I’m not trying to die the next time I scale a gnarly rock and I’m sure you’re with me on that. So I’ve started gathering data about the dangers of rock climbing.

Rock climbing is dangerous, and you risk falling and potentially dying every time you climb. But the danger is relatively low-risk compared to other action sports like skiing. In fact, there has been a 53% reduction in climbing injuries since the 1994 safety updates.

Even though updated safety measure has led to less injuries, you of course still can get hurt if you’re inexperienced or do something dumb. The silver lining is that your climbing trip will end injury-free if you’re careful.

I’ll tell you about the other types of climbing and their dangers next.

What is the most dangerous type of climbing?

To be fair, I’ve tried most types of rock climbing, from bouldering to top roping and lead climbing. I even love to go for Deep Water Solo Climbing every once in a while, and DWS is no piece of cake; it’s really dangerous if you don’t take the right precautions.

The only climbing that I haven’t tried yet is free climbing. Why? I say this with no disrespect to free climbers out there, but I’m not an idiot.

Free climbing is the most dangerous type of climbing and an extremely high-risk sport. It combines the hazardous aspects of bouldering and rock climbing because you climb 45-100+ ft. rocks with no safety gear, belay devices, or ropes. Even pro rock climbers advise against free climbing.

I think of free climbing as a sure-shot way of getting hurt – it’s even riskier if you’re overconfident about your climbing skills.

We’re often carefree when it comes to rock climbing gyms. Sure, no one really expects to get hurt in a gym, especially with the landing pad floors.

I was like that until last week when I realized that it doesn’t take a cliff for equipment to malfunction. It can happen anytime.

Indoor climbing (both indoor rock climbing and indoor bouldering) at your local gym is relatively safer, thanks to the auto-belaying systems, landing pads, and trainers. Still, you could twist your ankle or wrist while landing and hurt yourself if you aren’t careful.

A study was done by Dr. Volker Schofflin in which he visited about 500,000 climbing gyms in Germany. He reported around 0.02 injuries per 1000 hours logged in the gym and concluded that indoor climbing is very low-risk and safe if you follow safety practices.

To put things into perspective, a woman died at a climbing gym in North Colorado in June 2021 after falling 40ft above ground. So the chances of you getting hurt while indoor climbing or bouldering aren’t zero, but they can be if you follow your training and common sense.

Bouldering is the gateway to rock climbing for many of us. But is it safe?

Outdoor bouldering is done without any safety equipment or mat-covered floors. You do have pads to land on when bouldering outdoors, but there’s a small chance of you missing them and hurting yourself if you don’t use a spotter or you make some mistake.

I’ve spent hours on Reddit and other climbing forums, but @franichan’s triple fracture injury is the biggest outdoor bouldering accident I’ve heard of.

READ:  How hard is bouldering compared to top-roping and rock climbing?

Indoor lead climbing is very safe and relatively injury-free because of safety measures at local sports gyms. But you could sustain minor injuries if you’re not careful.

In lead climbing, you climb the wall while attached to a harness that runs through the belayer below you. Since the route is not predetermined, you hammer bolts and clip the harness as you go.

Outdoor lead climbing is the second-most dangerous form of climbing after free soloing — the risk of falling increases when you hit 30 ft above ground. Most lead climbing accidents are from human errors and overconfidence, and some from equipment failure.

Top roping is the safest form of rock climbing because the harness is attached to a belay device at the base, and the belayer below constantly monitors you. Solo top roping is also very safe because of the high efficiency of auto belay devices attached to the top of the cliff.

Rock Climbing Injuries: How do climbers get hurt or die?

The biggest cause of climbing accidents over the past few years isn’t equipment failure or natural hazards like rocks falling.

Most climbing accidents in the last decade have been from human error, overconfidence, and climbers’ showing off their skills. Poor equipment checks and a lack of knowledge in the basic techniques have caused many accidents.

This problem is greatest among mid and high-tier climbers who aren’t experts or pros yet but have been doing well for some time. They become complacent and don’t do “boring” safety checks because “nothing has ever happened.”

I kept this at first because gear issues are easily the most apparent cause of climbing injuries.

Free soloing and rappelling are two of the most dangerous forms of climbing. Rappeling is when you climb a rope solely from your body without using any harness or belay device, and you already know what free soloing is.

Solution: Avoid both unless you’re a pro and 200% sure about your skills.

These bolts and cams involved in lead climbing could come loose and impact your belay system if they’re not hammered in enough.

Falling debris is another hazard while rock climbing that could literally knock you off the wall.

The average yearly death toll from various types of rock climbing accidents is about 0.006%, with only 30-40 deaths among 5,000,000 recorded climbing trips in North America.

How to Climbing Safely:

Rock climbing isn’t an injury-free sport, but the chances of anything happening are close to zero if you follow best practices and use good equipment. Try it out and see for yourself.